The Wapiti and the Maral do not differ much from each other, they represent the same species – red deer, which also refers to the European red deer and other subspecies. However, the hunter should consider that the Maral is significantly larger than the wapiti and has larger, massive, goblet shaped horns, with a smooth interval and a big number of processes. After the fourth process the horns bend back for approximately 90 degrees. The wapiti has a narrower shape of horns comparing to Maral. Wapitis’ horns are thinner and more graceful. The number of processes on one horn is no more than 6. The Far East species usually have dark chocolate color and sometimes can possess a crown on its end. The greatest chance of getting a good trophy is during the mating season. The male species are more active at this period and can easily come at the short distance when hearing the sound of the pipe. But this depends on a gamekeeper’s professionalism and even his ear of music. The deer is able to feel the falseness and if this happens, the hunting is over. I met some gamekeepers who were able to beckon the animal one more time after the wrong shot, of course, in case the deer has not seen the hunter yet. This type of hunting requires a good physical training since the hunter needs to walk a lot. Hunting for Maral and Wapiti during the mating season is considered to be the one of the most beautiful activities. Should you hear the sound of Wapiti – you hear the song of Siberian taiga. The Wapiti and Maral voices do not differ much, the only difference might be a slight bass tone in Maral’s voice. The best time for hunting may differ, depending on the area In general, the season lasts from September, 10 to October, 10. 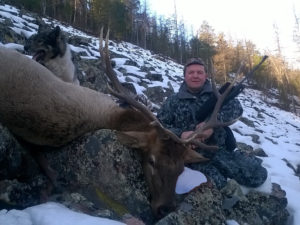 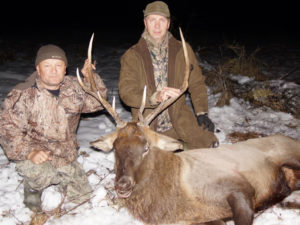 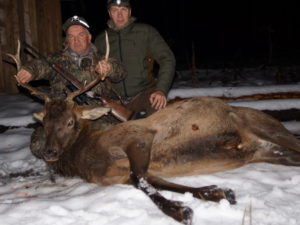