Hunting in the den 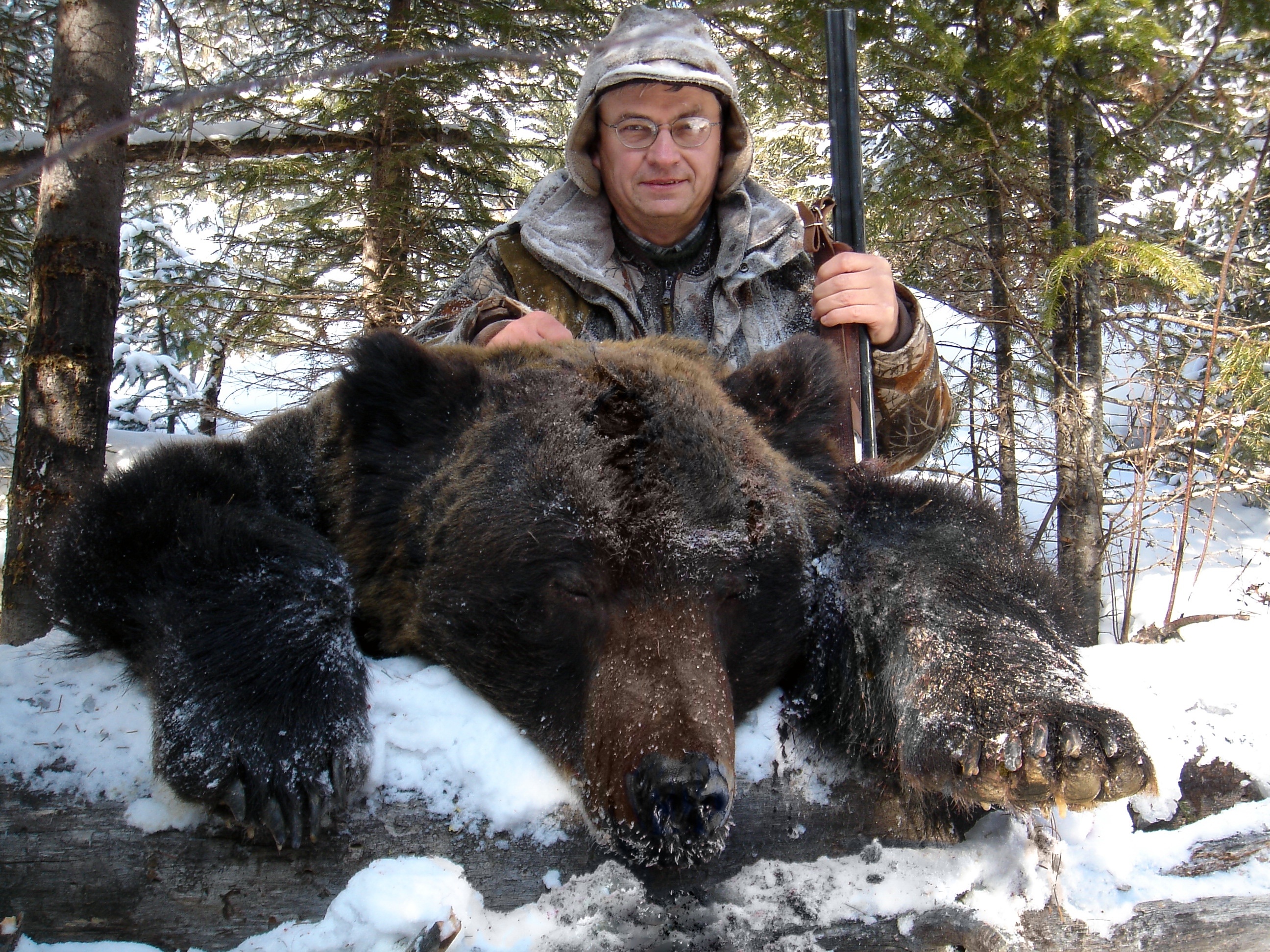 Hunting in the den is the one of the most popular entertainments in Russia. Courage was checked by the hunting. There were times when people hunted with Siberian weapon like a glaive and flintlock. Now a power of a bear and the person is not equal any more. Nevertheless, this hunting remains to be one of the most fascinating and dangerous!

Brown bear is the largest and strong predator in a forest and taiga zone of Siberia. The larger the sizes of bear are, more dangerous and more aggressive bear is. Body length of an adult male can be about three meters. Weight is up to six hundred kilograms. Average adult bear can weight about 300-350 kg in a zone of Eastern and Western Siberia. However, there are giants which larger than the relatives. A half of the all trophies got in the Irkutsk region; the largest ten trophies of the East Siberian bear have entered the Book of records of SCI.  The fact that bears has high intelligence. This large animal lives dormant or hibernates in the winter time. It is not deep anabiosis which is peculiar to chipmunks, gophers and groundhogs.

Bear hibernation is a state of slow vital signs of the body which is ready to be in full combat readiness in danger situations. The bear hears everything at distance of several hundred meters from a den. There are situations in which the animal can escape from the hunter who was is too noisy and came from the windward side. Therefore, it is necessary to be ready to any situations!

Experience of the hunting shows that hunter has to know some rules in order to be in safety.

Rule 1. All participants of hunting should stay and go to bear from the side of the way in the den. Bears always go down the hill.

Rule 2. Weapon has to be always ready to shooting. It is necessary to lower weapon when the bear begins to leave a den. It excludes a possibility of casual shots and wounds of the hunter who go out of shoot line at the movement of an animal.

Rule 3. Experienced hunter should be the leader or the commander on this hunting. All participants of the hunting have to submit to him. Strict discipline will allow excluding all possible incidents.

The den can be different but it is adapted for hibernation lair which bears made by digging or finding in the forest. The bear begins to prepare several options at the beginning of September. Male bear can have 5 variants of the den. Female bears make one or two dens but female makes a big den. Young bears have one den, and they use natural hollows in rocks and tree blockages. Adult males try to find snow places at big heights. Female bears prefer places with open areas for bear cubs.

Moral problem of the hunting is hunting for females with bear cubs. As I have already mentioned, it is possible to determine a den of females by some signs, but sometimes they choose an old den. There is an absolute sign that there are a female with bear cubs in a den. It is squeak of the bear cubs.

I had to check many dens. Female bear always began to worry and it was transferred to bear cubs. It is really difficult process to check a den and do not fright a bear. If you would like to hunt by saving females with bear cubs, you should decide it with all participants of hunting and to check all dens.

The process of the hinting can be some minutes or some hours. It depends on bear. Adult bear leaves den quickly. Therefore, the bear can attack the hunter and it leads to tragedies. The bear perfectly understands who disturbs him and what happened.

There are 10% of the females, young males and adults, who have endured wound in the past. These bears try to sit in the den.

Do not stay on the roof of a den, it can be very weak. It is required to check whether den has the second exit or not. The leading hunter should check all possible openings of the den for this purpose. The bear listens and try defining quantity and a location of people. I have seen how bear checked strength of the den by feeling it.  May be it he was founding the way to leave den.

Many hunters have a question which is the following. What weapon is the most suitable for this type of hunting?

According to my experience, double barrel with twelve gages is the most convenient to hunting. The optics needs to be excluded; the shot distance seldom exceeds five meters. It is necessary to be in light clothes in order to be dry and to be warmed. However, you have to put on warm, waterproof clothes for couple of tens of meters to a den because hunters can to stand many hours without movements.

A good and reliable assistant is husky. Dog can control bears in some situations and save hunter. One dog is enough for hunting.

Some hunters have a question which is the following. How many people do in hunting be?

Experienced hunter can be one with dogs. Other hunters prefer be in group of the people. However, now hunting costs very expensive, and have many members. In my opinion, participation of three people and the insuring shooter is enough.

If you would like to buy a hunting tour, you should choose companies which have an organizational experience in hunting. Unfortunately, there are many companies which don`t have practice in this sphere. 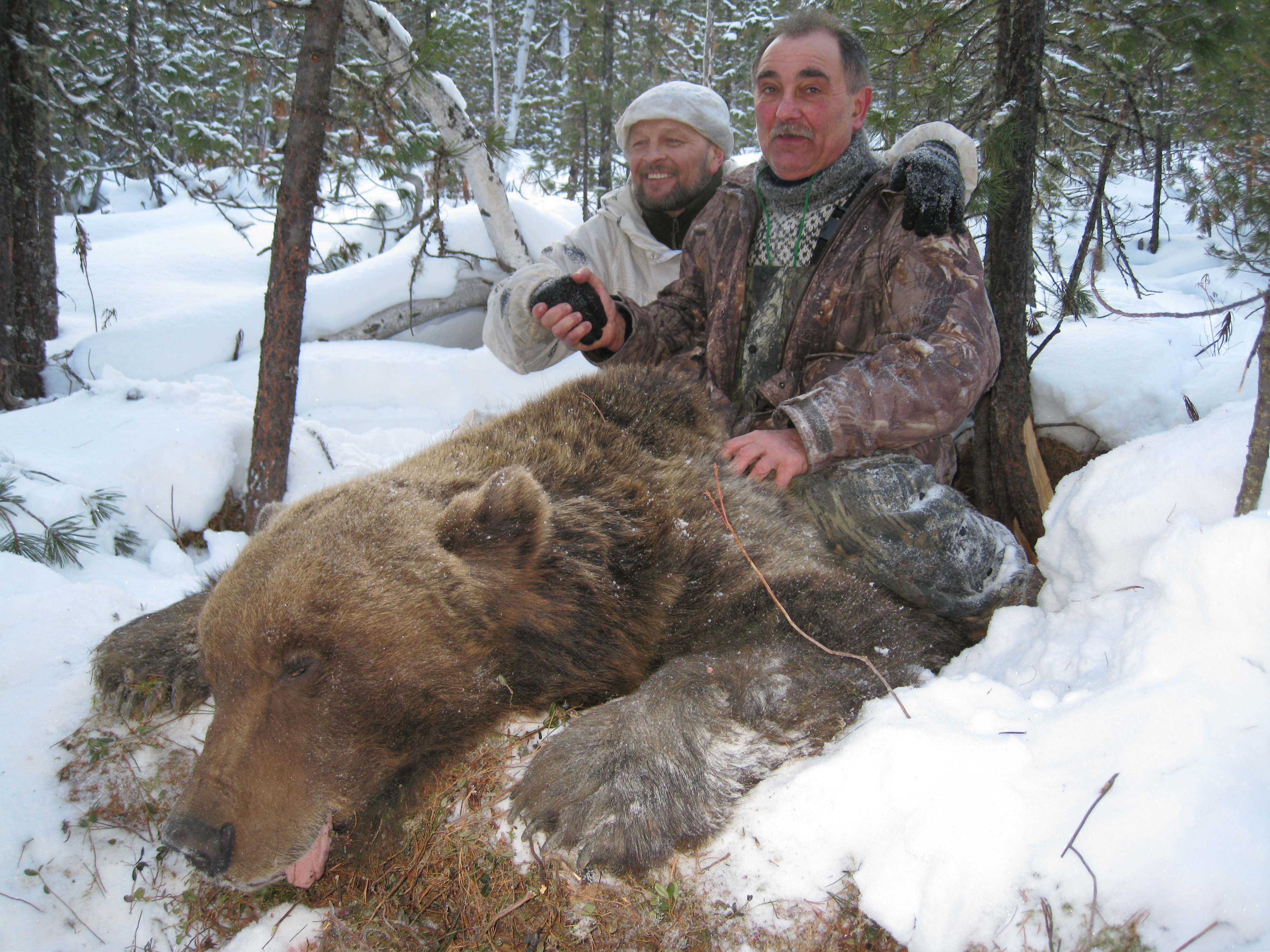